Month of August: Best of Quotes, Sayings and Poems August is often called the “Sunday of summer” – the summer is ending and school is starting… Let’s enjoy the remainder of summer and read through the best quotes about the month of August.

Quotes about the month of August by famous authors of many genres like inspirational and motivational.

August is that last flicker of fun and heat before everything fades and dies. The final moments of fun before the freeze. In the winter, everything changes.
– Rasmenia Massoud

Every year, August lashes out in volcanic fury, rising with the din of morning traffic, its great metallic wings smashing against the ground, heating the air with ever-increasing intensity.
– Henry Rollins

August rain: the best of the summer gone, and the new fall not yet born. The odd uneven time.
– Sylvia Plath

Breathe the sweetness that hovers in August.
– Denise Levertov

August is a gentle reminder for not doing a single thing from your new year resolution for seven months and not doing it for next five.
– Crestless Wave

This morning, the sun endures past dawn. I realise that it is August: the summer’s last stand.
– Sara Baume

The month of August had turned into a griddle where the days just lay there and sizzled.
– Sue Monk Kidd

August, the summer’s last messenger of misery, is a hollow actor.
– Henry Rollins

Short Quotes for the month of August Month of August Quotes: Wishing You a Happy August! Short quotes perfect to use on social media as captions or to spruse up your journals. Bunch of little saying to brighten your days in August. 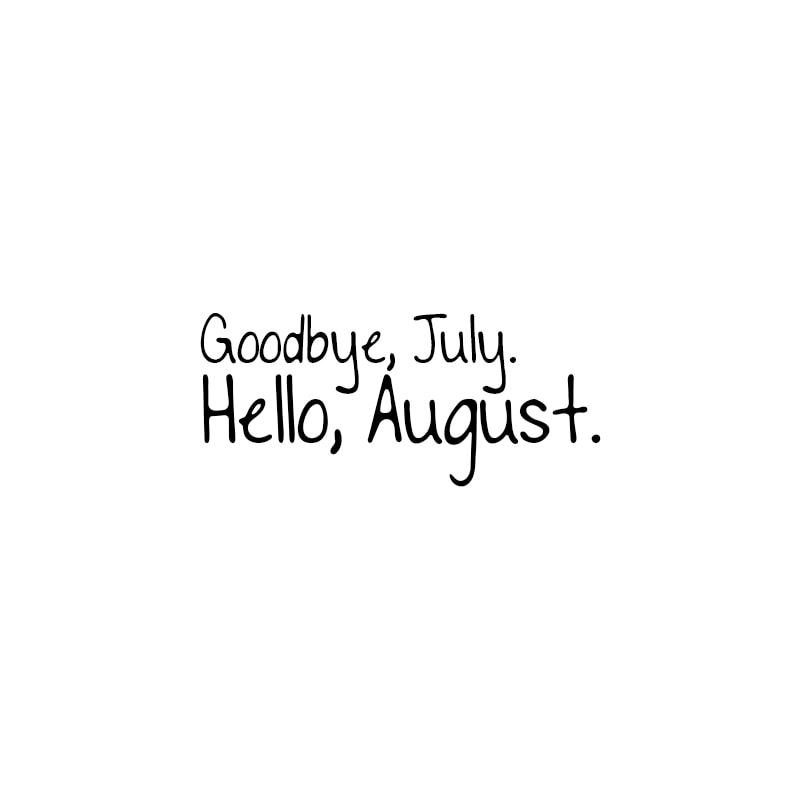 And hate the bright stillness of the noon
without wind, without motion.
the only other living thing
a hawk, hungry for prey, suspended
in the blinding, sunlit blue.

And yet how gentle it seems to someone
raised in a landscape short of rain—
the skyline of a hill broken by no more
trees than one can count, the grass,
the empty sky, the wish for water.
– Dana Gioia (California Hills in August)

Sometimes August isn’t recognized,
until December.
After it has faded into the hazy realm,
which all past months inhabit.
Its only legacy is etched upon our souls,
haunting our every thought,
in the most lovely way:

August is a time of growing up,
of forgotten forever’s,
full of the sweetest intent.
– Meka Boyle (August)

In the mute August afternoon
They trembled to some undertune
Of music in the silver air;
Great pleasure was it to be there
Till green turned duskier and the moon
Coloured the corn-sheaves like gold hair…
– Algernon Charles Swinburne (August)

When August days are hot an’ dry,
I won’t sit by an’ sigh or die,
I’ll get my bottle (on the sly)
And go ahead, and fish, and lie…
– Paul Laurence Dunbar (In August)

August days are hot and still,
Not a breath on house or hill,
Not a breath on height or plain,
Weary travelers cry for rain;
But the children quickly find
A shady place quite to their mind;
And there all quietly they stay,
Until the sun has gone away,—
August is too hot for play!
– Annette Wynne (August)

The August sun is pouring on the land,
His scorching rays, and vegetation stands
Beseeching to the skies for showers again
And being answered like the prayers of men…
– Ed Blair (August) Quotes for Important days in August

You can find even more quotes that relate to August on the website, continue your journey through August quotes:

Related to these important days that are recognized and celebrated in August:

Month of August: Best of Quotes, Sayings and Poems